Astell&Kern XB10 is a Premium Bluetooth Receiver/High Definition Adapter. Put simply it turns any pair of headphones, or speaker, into a wireless design, but retains, and even boosts the sound quality. The Austell&Kern XB10 retails for £149.

Astell&Kern are a specialist audio manufacturer. Astell&Kern believe in the power of music and so strive to provide the original sound without distortion. Their portable and home audio products offer the exact presence with tiny details bit for bit, exactly as it was recorded

The XB10 is the first bluetooth receiver/adapter to support new Qualcomm aptX HD technology. This means it includes a 24bit, high-power DAC so that it transforms smartphone sound and at the same time drives headphones harder. It even supports high-quality balanced headphones

With aptX HD, you can enjoy listening to your music at the highest audible quality when using a wireless device. APT-X HD is indistinguishable from high resolution audio. APT-X HD enables 24-bit music quality over a Bluetooth® wireless connection. To achieve the HD sound you need a compatible music player/phone as well as the XB10.

APT-X HD is found on several smartphones. In fact the LG G5 was one of the first to feature this tech. So what does the XB10 sound like and how well does it perform. Well I paired it to my iPhone 7 Plus, Huawei Mate 9 and my friends LG G5. I then plugged my Oppo PM-3 and Sennheiser HD598 headphones into the XB10. I would have loved to have tried a pair of balanced headphones with the XB10 as the sound was phenomenal using the XB10 on all 3 of the different players. The XB10 powered both headphones with such ease.

Apple iPhone 7 Plus – the XB10 has the Apple AAC codec and sounds terrific. This is such a good solution for using your existing wired headphones without wires.
Huawei Mate 9 – The Mate 9 has the standard APT-X and again sounded really good.
LG G5 – This has APT-X HD built in so transmitted 24 bit bluetooth sound to the XB10. Truly stunning and so good this is the end of wires!

So are there any negatives. Just one. Its range is limited to 10 metres, but in reality if using the APT-X HD you do need to keep the music player/phone nearby as the bandwidth used is much higher than standard bluetooth.

To really appreciate this dynamite piece of tech, you need to watch the video.

PS. Note this was not a review sample or loan unit.

I am currently putting the Lenovo P2 through its paces testing every aspect of this new phone that is available on Three UK for £199 on PAYG.

To give you some idea of what makes this phone special, take a look at the key specs –

My full review will be live soon, so if you have any questions please let me know either by leaving a comment below, or contacting me across social media.

At 1pm today, HTC will officially reveal its new flagship the HTC 10. However, why wait until 1pm!

Below are the specifications are full product video.

And below is the full product video. So is this enough for you to consider this as your main phone?

So Samsung announced the Galaxy S7 and S7 Edge yesterday to the world’s media with a few surprises. Mark Zuckerberg had a guest spot to emphasis the working relationship between Samsung and Facebook and Virtual Reality.

So like I did with the LG G5, below are the tidbits of information you may really want to know.

– 12mp is only available at 4:3 ratio. If you want to shoot at 16:9, the resolution drops to 9.1mp.
– 32gb is the only storage option available.
– Micro SD card support is available but not adoptable storage
– Features an always on display with customisation
– The Edge model has a larger Edge panel and is open to developers.
– Build quality looks exceptional
– Car mode integrates with Glympse for instant location sharing with contacts
– New Wireless Charger available which is angled. Wireless charging is faster now too
– Microsoft productivity apps are included
– Only Gold and Black in the UK currently available to pre order. Silver is absent currently.
– Samsung Pay is coming to the UK and other select countries in 2016
– Official Samsung accessories include a case that allows for clip on lenses. The Official Leather Cover case really reminds me of the Apple Leather case!
– Gorilla Glass 5 is being used
– Whitepages is integrated into phone app
– New Samsung Gear 360 camera works with the new S7
– Fast battery charging: 83% in 30 min (Quick Charge 3.0)
– Vulcan API – Gamers Dream

LG just held an outrageously amazing press launch of its new flagship smartphone, the LG G5. But LG didn’t stop there. It then went and launched add on modules for the LG G5 and then carried on with a range of LG Friends accessories.

This was a big day for LG.

However, rest assured this is a beast of a phone. So now I am going to highlight the extra bits about the phone that caught my attention as worth pointing out.

– The G5 has an always on display which uses just 0.8% of battery per hour
– The screen is still an IPS display and not amoled. It is able to crank the brightness up to a stonking 850 nits
– The infra red blaster is still present on the G5
– The app drawer has been removed
– QSlide apps and Dual Screen mode has been removed to simplify the UX
– The new LG UX launcher is much lighter and looks so much better than previous versions
– Cameras – 8MP front camera for selfies, rear camera has a standard 78-degree 16MP lens and a 135-degree wide-angle 8MP lens. This can work in conjunction or separately to each other.
– The camera app has loads of extra features and modes – truly brilliant
– Naturally the rear camera is similar to that found on the G4 and V10, but it does perform better due to the processor and a few extra tweak. Actually a lot of extra tweaks.
– The Snapdragon 820 processor has a Adreno 530 graphics and lower-power Qualcomm® HexagonTM DSP as well as Qualcomm Spectra™ 14-bit dual image signal processors (ISPs) The processor also has an integrated X12 LTE modem that supports Category 12 download speeds of up to 600 Mbps and LTE Category 13 uplink speeds of up to 150 Mbps.
– Micro SD card – adoptable storage is not available
– Slot in modules available
– Quick Charge 3 support
– USB-C
– APT-X is included but with the new High Definition APT-X, APT-X HD. This is the end of wires for headphones and likely how/why Apple will remove the headphone socket from the next iPhone.

The LG G5 has a number of modules and friends. See below. 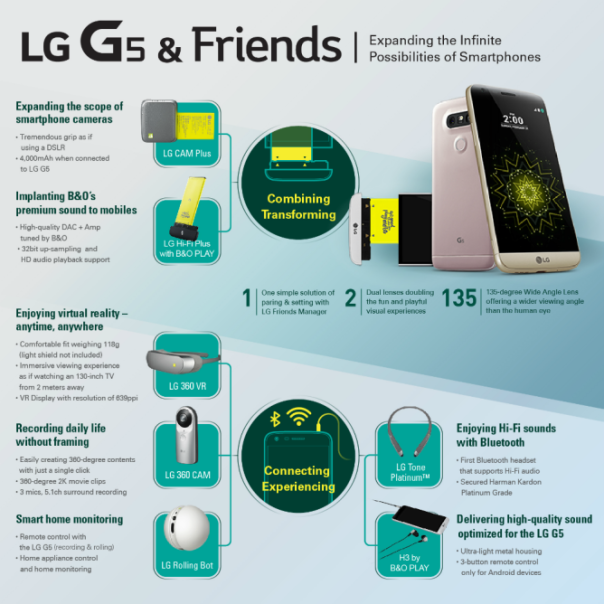 LG focused on two slot in modules. These simply slot in to the bottom of the G5.

– CAM Plus adds more grip and width to the device, for better usability while taking photos. It has physical buttons for power, camera shutter, video recording, zoom, and an LED indicator. It also functions as an external 1200mAh battery.

– Hi-Fi Plus with B&O Play is a portable Hi-Fi DAC audio player with 32-bit 384KHz high-definition audio playback. As it has a USB-C port it can also be used independently of the G5, ie. with PCs and other smartphones.

But LG want you to have fun with the G5, so have a range of LG Friends that connect seamlessly to the G5.

These include a LG Rolling Bot that is a companion device that rolls like a ball while capturing images and videos with its embedded 8MP camera. Not just a toy, the LG Rolling Bot can be used as a monitoring system for the home, pet care companion as well as a remote controller for compatible home appliances. With an IP camera connectable via Wi-Fi, users can remotely monitor the interior of their homes with the LG G5 via live streaming.

To see more of all of the above, watch the official 4 minute video from LG. And don’t forget, I will be reviewing the LG G5, the modules and friends. The G5 is expected to launch early April 2016.

Qualcomm unveiled its new Snapdragon 820 processor. It is a beast of a processor but let’s hope it doesn’t overheat like the 810.

The full specifications are as below –

Last night Verizon and Motorola held an event to launch new Droid phones. The Droid Turbo 2 was more of interest to me with its extensive specifications, but more importantly a useful new feature – a shatterproof screen.

Before we talk about the screen, these are the key specs –

So the Motorola X Style has been beefed up with a bigger battery, extra sensors and Qi/Powermat Wireless charging. And then there is the shatter proof display. Quite a big claim from Motorola, but in tests carried out on YouTube, the screen does not shatter when dropped. Now all phones need this tech but I doubt manufacturers would want to add this as nobody would need to buy a new phone if they broke their old one when the screen cracked!

However, the Verizon logo printed on the front of the phone is awful. 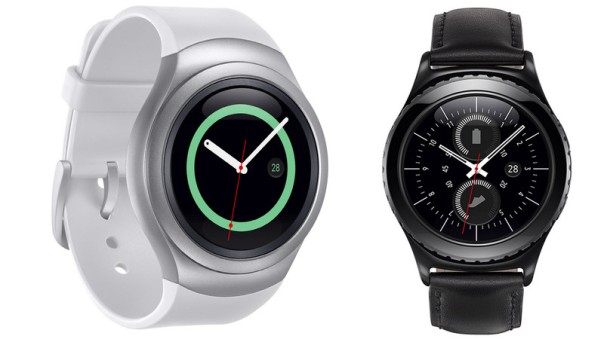 Samsung has officially announced the Gear S2 its Tizen-powered smartwatch which will come in three variants: the regular Gear S2, and the Gear S2 Classic offering a black finish with a matching genuine leather band. The 3rd option is with 3g and voice calls. This version has a e-sim. The Gear S2 offers a rotating bezel, as well as a home and back button for easily dealing with notifications.

Samsung is apparently working closely with partners to offer a range of watch faces and watch bands so that users can have a variety of ways to express their personal style and mood. Users can easily change the band with one click, and change the watch face for a more personalized and sophisticated Gear experience depending on the time, place or occasion.

Samsung is working with partners to expand the utility of the smartwatch in new ways, including smart car keys, house keys, and remote controls to manage a connected home. Seeing is believing as my Gear S whilst really excellent as what it did , didn’t get many extra apps after I bought it.

You have to be a real Samsung fan to want one of these as its tied to using Samsung hardware. Now Android Wear supports iOS this is really a specialised use case. However, it will do exactly what it says on the tin and really well.

Will the Gear S2 be made to feel inferior by the next round of android wear watches to be announced in a few days? Not long to find out! 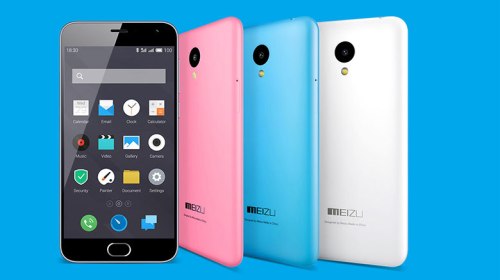 The Meizu has just announced the M2, that costs around £65. For that you get the following –

– The quad-core Cortex-A53 processor has a clock speed of 1.3GHz, making the MEIZU m2 blazing fast. MediaTek’s CorePilot™, the highly efficient multi-processing technology, allows the CPU and GPU to work together perfectly. The 64-bit processor is powered by the all-new Flyme OS 4.5 based on Android 5.1 to deliver a smooth user experience.

At this price point and the overall offering how can you justify more expensive phones!

Samsung has taken the wraps of the Samsung Galaxy A8. It is 5.9mm thin! But it has a 3,050mAh battery still powering a 1080p 5.7 super amoled screen. This on paper looks like a really good phone. Other specs include a Snapdragon 615, 2GB of RAM, and 16GB or 32GB internal storage with microSD expansion up to 128gb micro sd card. The rear camera is 16MP main camera, fromt 5MP f/1.9. A fingerprint scanner is included too