Did you know there is a huge secret menu in the Samsung Gallery app that you can reveal.

In case you’re wondering what the entire options are see below.

Welcome to my Pixel 6 Pro long term review. In this review I detail 7 reasons not to buy the phone.

I also discuss the January and December updates, and showcase photos throughout the video.

In addition, at 11 minutes 30 seconds into the video, the photography showcase section starts and continues until the end of the video. It is approximately two minutes long. The showcase shows you some of the best photography from a smartphone. Don’t miss this whatever you do!

The Google Pixel 6 Pro was probably the most anticipated and hyped phone in a while. This was the first phone from Google that finally used new camera hardware. The previous Pixels phones had been using for the last 4 years the same camera hardware, with the reliance on its computational software.

So let’s start at the beginning. Above photo is the setup process where it is transferring all my data from my iPhone 13 Pro. This is a pretty good solution as its moves most of the core data across including SMS, photos and even WhatsApp chats. So a good start.

Then there’s the fingerprint sensor, which sits behind the front screen about one third up from the bottom. The Pixel also downloaded apps that were cross platform, that is available on iOS and android, so within a few hours I had a fully setup Pixel 6 Pro, complete with a out of the box firmware update as well. So what could possibly go wrong?

Well the first thing to test would have to be the camera.

Above, this is a Pixel 6 Pro night mode shot, edited by myself for a more dramatic shot. And with this one particular shot, it produced a better quality shot than my iPhone 13 Pro using its night mode. Except for two things. One the iPhone shot looked more realistic and more like what my eyes were seeing and secondly the iPhone 13 Pro only needed 23 seconds. For context, both phones were on a tripod to get the best night exposure times. The Pixel 6 Pro need 4 mins and 12 secs.

Above, another Pixel 6 Pro, using its fancy motion mode.

All was going well with the Pixel 6 Pro until I took it out during the daytime for some shots vs the iPhone 13 Pro.

This is when I began to swear at the frustration of unlocking the Pixel 6 Pro with its fingerprint sensor. It was so hit and miss and so slow. Face ID on the iPhone was instant. Switching between the two phones to snap each shot, I also began to appreciate the smaller physical size of the iPhone 13 Pro versus the large slab size of the Pixel 6 Pro. Just one more point on the fingerprint sensor, if you hands are even slightly wet, you’ll struggle even more to unlock it.

Have no fear I thought. The frustration of using the Pixel 6 Pro fingerprint sensor will be worth it as the photos will be so good vs the iPhone 13 Pro. IMO the iPhone did better in 8 out of 10 pics. The Pixel just goes overboard too much with the HDR processing to the point the photos look fake. When it comes to video, the iPhone is better, but that wasn’t unexpected. The other point I noticed was the battery drain. The iPhone barely broke a sweat, whereas the Pixel had lost a 20% more battery.

Just going back to the camera. With the Pixel 6 Pro it has the fancy long exposure modes. I took a shot of a waterfall. It took 4 to 5 seconds to take the shot. The iPhone 13 Pro was a split second using Live Photo mode. With the iPhone once you have snapped the shot, go to the Photo gallery, and toggle the Live Photo into long exposure. The end results. Not only did the iPhone take under a second to take the shot, but the silky water effect was miles better than the Pixel.

Android 12 had a number of positives but also wasn’t without its frustrations and bugs. Ultimately the inconsistency of unlocking the Pixel 6 Pro and my views of the camera not being blown away, have killed my love affair of this new phone from Google.

Now some context. I believe the December 2021 update is meant to improve the responsiveness of the fingerprint sensor. We shall see if this pans out, I have looked at photos from many other people who have shared their Pixel 6 shots. From what I have seen, pets and people work reasonably well, are punchy and sharp and instantly shareable on social media. Other photos even though they are heavy in the HDR processing do look ok on social media, just not my cup of tea at all.

Welcome to my review of the Realme GT which retail for around £300.

The Realme GT is a fantastic phone offering incredible specs versus the pricing. Yet it delivers really well. Highly recommended. 9.1/10.

Welcome to my review of the Huawei Mate 40 Pro. This is a flagship phone from Huawei costing over £1,000.

In my time with the Huawei Mate 40 Pro, I really loved the feel in the hand, the hardware overall was a joy to use. I was able to use Huawei’s new Petal Search and Huawei’s App Gallery to find a number of apps that I used as well as a few alternatives to those found on Google Play. But the experience is ruined on the software side by this struggle for apps. However, some might be ok with the options available, Facebook and many others can be installed with ease. So check out my video for more info on the app situation and my overall review of this phone.

The Huawei Mate 40 Pro is an incredible piece of hardware with very capable cameras. If only it had Google Mobile Services out of the box, it would be an easy recommendation.  As it doesn’t, for anyone in the UK it can only get a 6.5/10 as a consequence. If ever Huawei get GMS re-instated, and the phone’s firmware is updated to add this back, the 6.5/10 would jump to an easy 9/10. 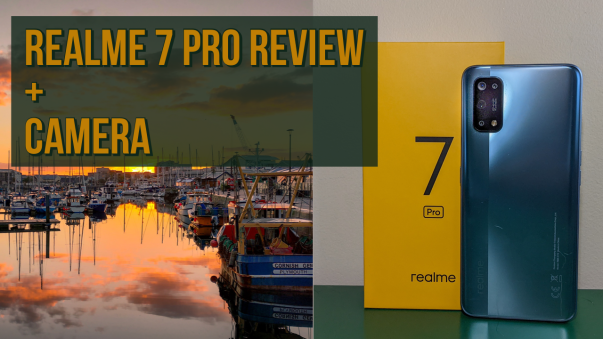 Welcome to my review of the Realme 7 Pro which retails for £279.

Battery Performance – The Realme 7 Pro comes with  65W SuperDart Charging. This can quickly power up the 4500mAh massive battery, while keeping the phone cool. 4500mAh battery can be charged to 100% within 34 mins. And only in 12mins, it can charge nearly 50%. Even while heavy gaming, the 65W SuperDart Charge can charge up to 43% in just 30 minutes. Only 3 mins, Realme 7 Pro can be charged to 13%, The Realme 7 Pro also supports 18W PD/QC charge, making it even more versatile. In reality, the phone lasted about 2 days on a single charge, but it was easier to top the battery up at the end of each day. Normally 20 mins was all that was required. The phones recharges so fast!

Cameras – The main rear sensor uses a Sony IMX682 Sensor which is 64MP . In addition there is an 8MP 119° ultra wide-angle, and a 2mp macro lens and a 2mp B&W portrait lens. The Sony IMX682 Sensor has incredible light-sensing ability, and comes with 1/1.73″ super large size sensor, 64MP super high pixels, supports Quad Bayer, pixel size up to 1.6μm. The front camera is 32mp.

The video review below includes a range of photo and video examples from the camera, a run through of the camera app interface and features.  The photos are stunning, so it is well worth seeing these to understand just how good the camera is on this phone.

Welcome to Part 1 of my Pixel 5 camera review. This includes 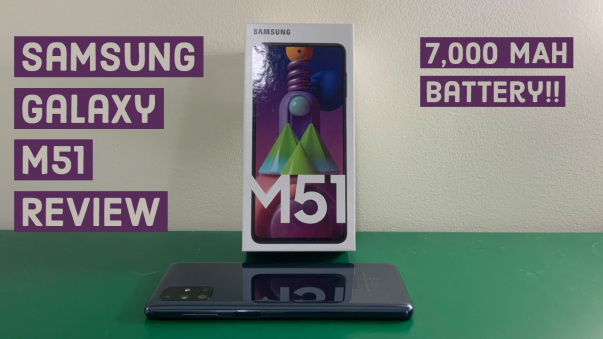 Welcome to my review of the Samsung Galaxy M51 which retails for £330. The main feature of the phone is its huge 7,000mAh battery.

Probably one of Samsung’s best phones for 2020. Incredible endurance, plus good all rounder 9/10.

Welcome to my review of the Poco X3 NFC smartphone which retails from £199 for the 64gb version. It is also available with 128gb storage for £229.

– The POCO X3 includes an AI quad-camera with a 64MP primary sensor and a 13mp ultra-wide-angle sensor, 2mp depth sensor to help with portrait mode, and a 2mp macro sensor.

– The POCO X3 features a 6.67″ display with a 120hz display for smoother scrolling and browsing.

– The POCO X3 includes 5160mAh big battery, for more prolonged phone usage without having to recharge.

– The POCO X3 comes with a 20mp punch-hole selfie camera.

– The POCO X3 also features a side-mounted finger-sensor, allowing you to unlock your phone from the side using the natural grip of your hand.

– It also has a FM Radio and Infra Red Blaster.

The POCO X3 NFC is not just a budget priced phone, but an incredible phone. At £199 it’s a massive recommendation but do see my other video and post on how to remove the system ads which is a one off 10 minute exercise . 9/10.

Welcome to my first impressions of the Samsung Galaxy Z Fold 2 which retails for £1,799. In my video review I also show you how you can make Instagram go full screen along with any other apps.

– Unfold the next chapter of mobile phones. Our most innovative and powerful smartphone ever, with an expansive Infinity-O Display wraps from edge-to-edge.

– Enjoy an ultra-smooth viewing experience on the unfolded display, with a refresh rate of up to 120 Hz.

– Take the perfect selfies with Galaxy Z Fold2 5G’s Triple Rear Camera, checking your best side on the cover screen. While taking pictures of your friends, they can check out their shot using Dual Preview.

The Samsung Galaxy Z Fold 2 is a work of art. A multitasking champ, it’s own tripod and a marvel of modern technology. If you can afford it, then buy it. Recommended 8/10.