The Nexus 6P is the first Nexus phone to have a decent camera. The camera has large pixels, 1.55 microns but does omit optical image stabilisation. Google commented that OIS was not required with such large pixels.

Whilst in my testing, the lack of optical image stabilisation has not been an issue for many of the shots, I do believe it would make a difference still especially in low light. I also believe the software could be further enhanced over time to make the camera a fair bit better all round.

Anyway, some random shots from the Nexus 6P.

Photo 1 – Plenty of fog, but a good shot despite the conditions.

Just some background when taking these photos. I took these all hand held and as fast as possible. Overall, I like the quality of the Nexus 6P photos. However, HDR+ takes too long to save photos and the battery life gets zapped when taking photos.

With nearly every smartphone test, I take a photo or two of my local church. This serves another purpose as it allows for comparisons with previous tested/reviewed phones on picture quality using the church as the reference. Obviously, weather conditions can play a part, but it still provides a reasonable guide.

So below, in spooky fog, the Church of St Michaels and All Angels, Princetown, taken by the new Nexus 6P. I thought the quality was excellent in this shot, despite the fog and rain!

So another day with the Nexus 6P and I am rapidly falling out of love with this phone.

– As I have the 128gb model, I wanted my music sitting on the phone. Nothing worked until I rebooted phone and mac. I also had to re-install android file manager. This worked.

– I also wanted around 1gb of my favourite photos on the phone. Android File Manager wouldn’t copy the photos across. No matter what I tried, nothing worked.

– USB Audio does not seem to work. This is a disaster for me. I don’t understand why Google would have killed this function. However, bluetooth audio is really good. Update – apparently USB C removes the need for OTG so I am testing another option and will update this post again shortly.

– The camera. The weather has been horrific so I have only tried some indoor shots. The 1.55 microns do make a difference but not for every shot. HDR+ is slow saving.The Google Camera app is too basic IMO and whilst it can take some good shots, they are not class leading. Why no OIS? With OIS the camera could have been a class leader!

– Battery so far is average at best.

– USB C cables are a PITA. All my adapters, special micro usb connectors, nothing works.

That’s all. I will be spending the weekend with the Sony Xperia Z5 Compact so that I can finish my review for Monday.

I will try to take some photos with the Nexus 6P, assuming I haven’t sent it back!

And finally, if if you are buying anything on Amazon UK, please use the link below. This will help support Gavin’s Gadgets with all the running costs and more and won’t cost you anything extra either. Thanks in advance. Don’t forget to use the link if you buy any bargains on Black Friday or for Christmas etc..

So my Nexus 6P 128gb Frost White arrived yesterday. It is a big device.

From left to right, Huawei G8, Nexus 6P, iPhone 6S Plus, Sony Z5 Compact and a BlackBerry. I do wonder if we have lost the plot on screen sizes now?

The Nexus 6P has stereo front speakers and a new USB C cable.

I was disappointed to find only 111gb free of the 128gb model. Clearly despite being hardcore android the firmware is large. As a comparison the 128gb iPhone 6S Plus has 113gb free out of the box but does include loads more apps. 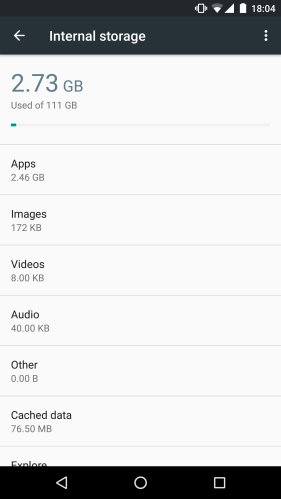 Despite the space available, I can’t see myself running out any day soon. So what do I like and what don’t I like ?

As first impressions, the frosted white is fantastically beautifully amazing choice of colour. I am so pleased I didn’t opt for aluminium or black. There are 2 cables in the box, one is USB C to USB A but so short it is a joke. The USB C to USB C cable is an ideal length. Suddenly, I realised I have no compatible cables and charging in the car and around the house is an issue until I get more USB C cables. I found a good selection of USB Type C Cables and Adapters on Amazon

The phone feels premium but is not that comfortable to hold as it is big. The Nexus 5X was much easier and more comfortable to grip in the hand. The fingerprint sensor works really well, but when the phone is face up on the table, its no use at all. Apple and Samsung and even Sony have the sensor is a more suitable location.

The camera. I have tried some random shots just to get an idea of its standard. It takes good shots but as to how good the quality of the camera is will only be established after I have had and more time and dry weather to take more photos. So far it took 3 indoor low light shots to get 1 shot to be better than that from the iPhone 6S Plus. My iPhone only needed one shot to get it right first time. The Sony Z5 Compact also only needed one shot. However, don’t read too much into this at the moment, as I need to understand the quirks of the phone and I will also see what can be achieved using third party camera apps. More soon.

Screen. I don’t like the screen. It feels muted except for watching films etc when it looks great. Add to the fact there are stereo speakers and it is a lovely media player. I will test for audio quality later as well.

And before I sign off, the highlight of the phone is its running pure android. That is a benefit to ensure you get the latest updates to the firmware, but it is also bland. Huawei’s EMUI and Xiaomi’s skins do add a lot of extra features. So it ultimately boils down to what your preferences are.