Welcome to my review of the brand new digital audio player from iBasso, the iBasso DX80.

In the box are a number of accessories, some of which are rather neat –

– iBasso Quick Start Guide
– Warranty Card with individual serial number and date stamp
– Silicon case – this is a neat addition to protect the device
– 80cm micro USB cable – charging, card reader or DAC
– Burn in cable adapter
– Male Coax (RCA) to 3.5mm Mono short cable
– 2 screen protectors. I already have fitted one so all my photos include a protector.

One of the usual pieces included is the burn in cable adapter. iBasso suggest the DX80 needs 50-100 hours to reach its full potential. There are several ways of doing this. One is to plug your headphones into the DAP and play music at a moderate level for 100 hours. The other option is plug this cable adapter into the headphone socket and play music at a moderate volume. No sound will be heard, but the DX80 will be perfectly burned in. When burned in, the DX80 can reach its full sound quality potential since the capacitors will be formed and the electronic components used all stabilised. I have burned the DX80 for over 250 hours before writing this review. There is a difference in the sound experience from trying it straight out of the box to a 100 plus hour burn in.

The key specifications are –

This is my first Digital Audio Player. I have really wanted to experience an iBasso product but have never taken the leap of faith that says having a dedicated device for playing your music is worth the extra effort required. 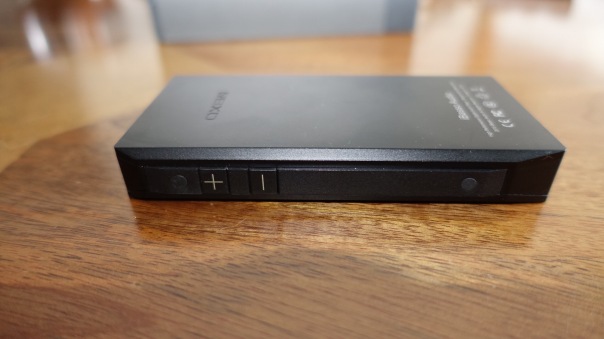 After the initial charge period, I checked the firmware to see that it was on version 1.12. From reading a few forums, I was aware I needed to update it to 1.14. To do this you have to download this from iBasso’s website and copy it across onto to the second micro SD slot in the root directory. You also need to make sure if you’re on version 1.14 or lower that to update the firmware you need a small sized non SDHC micro sd card. Luckily I had a 16gb card laying around. If your DX80 already has v1.14 you won’t need to worry about this limitation. Basically, each firmware update fixes bugs and adds some new features over time. The firmware update itself is a simple process. The next step is to copy your music across to your micro sd cards. If you’re lucky enough to own 2 x 200gb micro SD cards then you can use these. I am using a 128gb and 64gb micro SD cards.

So how does the DX80 function. It has 3 screens operated via touch. Now Playing, Library, and Settings.

In the library interface you can select between – Now Playing, All Music,Directory, Artists,Album, Playlist and Genre.

Swiping down from the top in Now Playing you get access to some quick settings – gapless, shuffle modes, USB mode, Digital Filter sharp roll off or slow roll off and Gain High or Low.

The DX80 also has physical buttons for power off, display off, volume and play/pause and next or previous track. These are really handy to use and one of the aspects that makes using the DX80 a real joy.

The user interface is not the most polished but it works fairly well. This is a new device, so based on previous iBasso products will get improved over time. The fit and finish is very distinctive and looks quite chunky in places. But large buttons for the physical music and volume controls do make the DX80 super quick to interact with and skip tracks without looking at the display.

In terms of music playback all 3 headphones I used were driven powerfully with a full range of dynamics and unlike some of my smartphones that simply run out of steam or volume, this won’t happen with the DX80. The DX80 has a decent amount of bass but not OTT at all. If the song has bass the DX80 reproduces it. The performance is full of energy. Playing classical is a joy as there is practically zero hiss at all. In other words a black background. I tried a range of genres to try and trip the DX80. No such luck. I did notice when I had All Music in shuffle mode, that selecting next track ocassionally created a slight audio click but this only occurred during the initial burn in period. Listening to some live jazz was spectacular. Now most of my music is 320mp3 but I did buy a Enya album in FLAC codec from HDTracks. OMFG. Anybody who says FLAC doesn’t sound better is lying unless they have hearing difficulties. However, what I like about the DX80 is its ability to squeeze miracles from MP3 coded songs.

iBasso have included components in the DX80 that are not found until spending 4-8 times more money in other devices. And it shows in terms of audio reproduction.

The DX80 has the ability to work as a digital transport only. The Chord Mojo is a new Digital to Analogue Convertor that has been receiving very high acclaim from across the world. 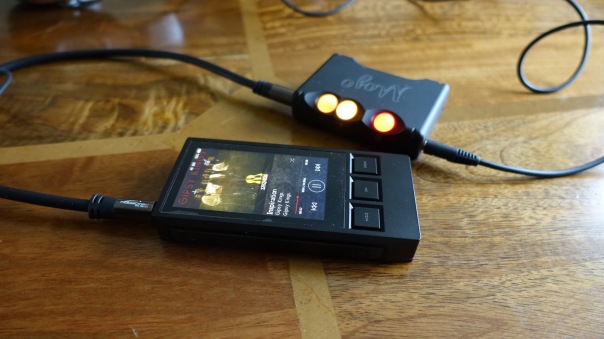 So connecting the devices together produces a mesmerising sound between the ears. First of all using the Chord Mojo does marginally reduce the bass but its presentation is more airy, spacious and has an incredible musicality and timing. I actually think the musical timing is so stunning that this is what makes the Chord Mojo special. Now I have tried using the Chord Mojo with other devices like an iPhone 6S Plus or Huawei G8 but the DX80 and Chord Mojo produce knock out punches. Using this combo is like rediscovering your albums!

The iBasso DX80 is a fine piece of kit. The user interface is not as cosmetically pleasing as other devices but it works simply enough. Unless previous firmwares add WiFi there is no option to stream music from Tidal and other services. At around £300 for the DX80 is a fantastic Digital Audio Player if sound quality matters. If you want to take it one step further, adding the £399 Chord Mojo takes the musical experience to another level. If you get the chance to demo the iBasso DX80 and Chord Mojo you really will be surprised. Recommended.

PS. A new firmware update has just been announced to be available within a week. I will update my review with details of the changes.

Update – Firmware v1.2 is now out. Changelog is as follows below. Don’t update to this. It’s a bug fest.

1. Fix the line output bug when the DX80 is used as a USB-DAC.
2. Enable sorting function on Now Playing.
3. Change from file name to title name on All Music view.
4. A more accurate battery indicator on low battery.
5. Improved M3U playlist import function, allows an apostrophe on file name.
6. Improved WAV ID3 support.
7. Allow custom wallpaper be read from either SD card slot.
8. Allow the player to display Hebrew.
9. Scroll bar added to all of My Music views.

23 thoughts on “iBasso DX80 – Digital Audio Player – My Review + Using the DX80 and Chord Mojo Together! – Updated with New Firmware”