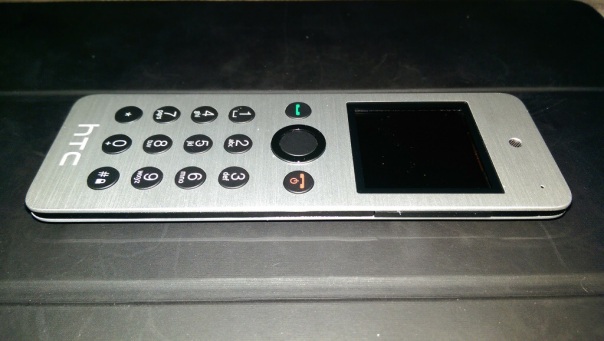 The HTC Mini+ icon and settings options appeared in the HTC One M8 so I was curious about it enough to see what all the fuss was about.

The official specs are –

So, it arrives as it is slightly bigger than I thought it would be and not as slim. It has a slightly curved back which has a plastic feel to it, thus ruining the metallic front finish look.

In the box is the instruction, device and micro USB cable. First up you have to give it a full charge. Turn on and pair either via Bluetooth or NFC.

Functions. If a call arrives on your HTC One M8 it displays caller and vibrates but the Mini+ rings with the name in the display. You answer and talk away. Call quality was fine but even at full volume the ring volume isn’t that loud. You can do conference calls on this. This device is very light so if you do lots of calls you won’t end up with hand ache. You can make a call from the Mini+ either by scrolling through frequents or tapping the name out on the keyboard until the name appears on screen. This is actually very intuitive and uses a T9 logic so is very quick with few taps needed for most names.

The Mini+ can act as a remote for the camera shutter, even worked on third party camera apps eg a Better Camera, gallery app ( so if connected to the HTC Media Hub you can use it to remotely show your photos on the TV ), PowerPoint slide remote with laser pointer and TV remote control. You can also use it as a controller for your windows PC. It also acts as a remote for media playing on the HTC One and works for most media apps.

The TV remote option is cumbersome as you have to use text based options displayed on the screen and takes the info from the M8 TV app. It also only has limited options. Better than nothing I suppose.

Find My Phone. Press this and boomsound blasts your ringtone at full volume. You won’t take long to find your phone.

Notifications – shows details of missed calls, readable text messages and replying using the text templates from the HTC One M8 and a number of received emails. However, this is from the HTC Email app only and it’s just says emails with the number received. You cannot scroll to see who they are from. Rather pointless. And that is it for notifications. It does sync notifications so if you read a text it’s marked as read on the HTC One M8. Same for calls. Diary. You can view next events for the day.

But the screen goes black in standby so unless you heard you had missed a text etc.. you wouldn’t know to check the screen.

The HTC Mini+ came with software version 4.0 and according to HTC’s website there is a firmware update but you need a windows PC. Mac is not available.

My closing opinion is it’s cool to look at, a conversation piece, but debatable as to its usefulness.