I really like my Apple Watch. However, it comes with a steep price tag as do the extra watch straps. But is there really any difference between the cheaper non Apple straps and an original Apple strap?

Well since owning an Apple Watch in September 2015, I have visited my local Apple Store and tried on several times various watch straps. I also own the official blue sports band and the Milanese loop, both of which fit perfectly and are have not had any defects.

So what about saving some money and using a third party watch strap or band for the Apple Watch. Well, firstly despite all the reviews you can read on Amazon, the quality, fit and finish in my findings shows that none of the third party alternatives are of the same standard as those sold by Apple. (Where possible text in bold is also a link to Amazon so you can read more about the item). Now, the balance is the cost. Third party straps and bands often cost a fraction of those sold by Apple. This means you can recreate that look for a lot less and often with more colour choices and different types of straps and or bands.

The photo above shows a Pugo Top Euro Genuine Leather band for the Apple Watch. It got delivered on 4th January 2016, and as you can see is not lasting too well. Fortunately, I bought this via Amazon for £21 , so I can return this for a refund. Whilst the Pugo band looked identical to the Apple leather loop, it felt nothing like the Apple original. I doubt also that leather was used or I should say genuine leather in the Pugo band.

However, I did buy a Snugg Leather strap in both red and black leather. This is more like a traditional watch strap and has proven to be a good buy.

Now let’s take a look at something by Spigen. Below is photos of the Spigen Rugged Watch strap and the Spigen Watch case. I got the watch case out of curiosity and also because it was on offer. 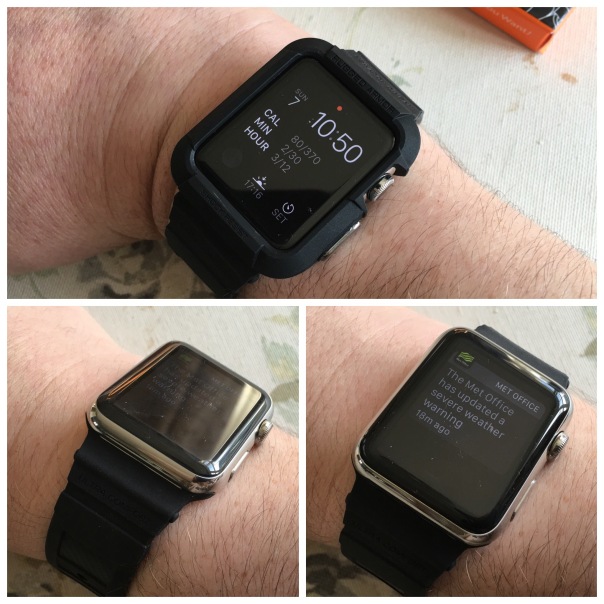 Spigen is a well known brand and consequently the strap fits really well. The watch case does too, but it’s not for my liking. The case also comes with 2 screen protectors.

So the moral of the story is if you want original masterpieces by Apple you will have to pay the high price. Some third party straps and bands are poor quality while others are ok and other more choice too.