The Galaxy Gear in mocha grey arrived a few days ago and I have been trying to get a sense of its usefulness.

It certainly splits opinions as to its looks. Some say it’s too big and bulky and looks butt ugly. Others are amazed by it. It’s fairly light despite its bulk. Other comments were over attention to detail. The screws on the Gear and not tightened into the same position. Other watches at this price point would not be like this!

Also there was an ongoing debate on twitter as to whether it’s really a watch as the time is not displayed permanently. When you lift your arm the accelerometer triggers the display to show you the time or chosen clock face.

Putting all that aside it comes in a typical Samsung box with the watch, charger, watch cradle with NFC, quick start guide and warranty leaflets.

I completely missed the fact that to NFC pair the Gear to the Note 3 that the watch cradle needed to be attached so I ended up manually downloading the Galaxy Gear Manager app and using bluetooth to pair the devices.

From the Gear Manager you can completely configure the watch complete with whatever face clocks required and the types of notifications you would like it to receive. 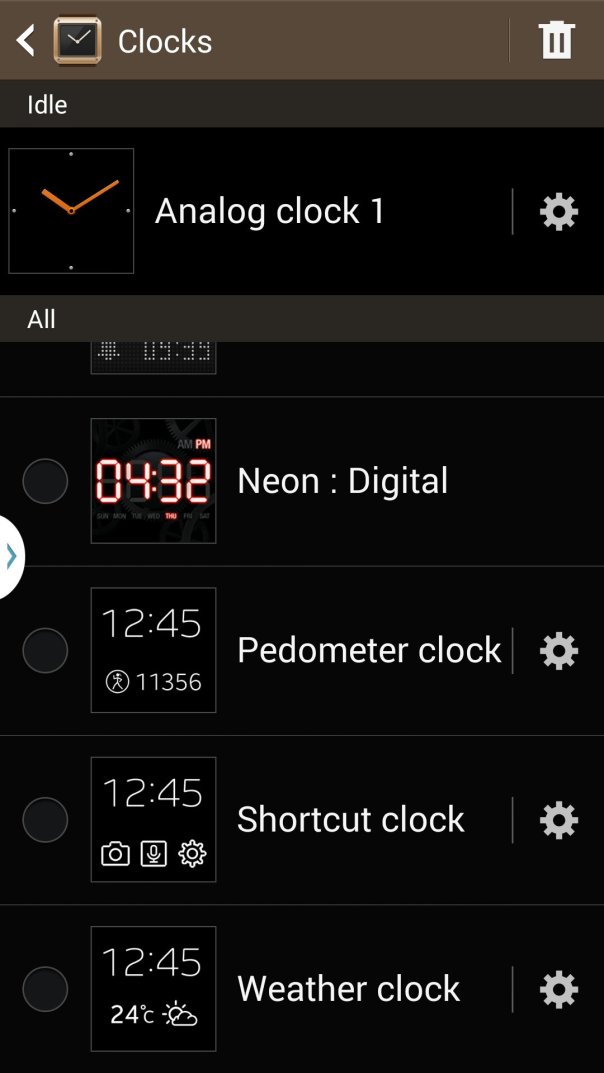 Some of the clock faces include shortcuts to apps and other functions. I like a plain face with the day of the month enabled in the clock options. They are a few more clock faces to download in the Samsung App store along with actual apps you can run on the Gear.

There are many settings that greet you when you open the Gear Manager. 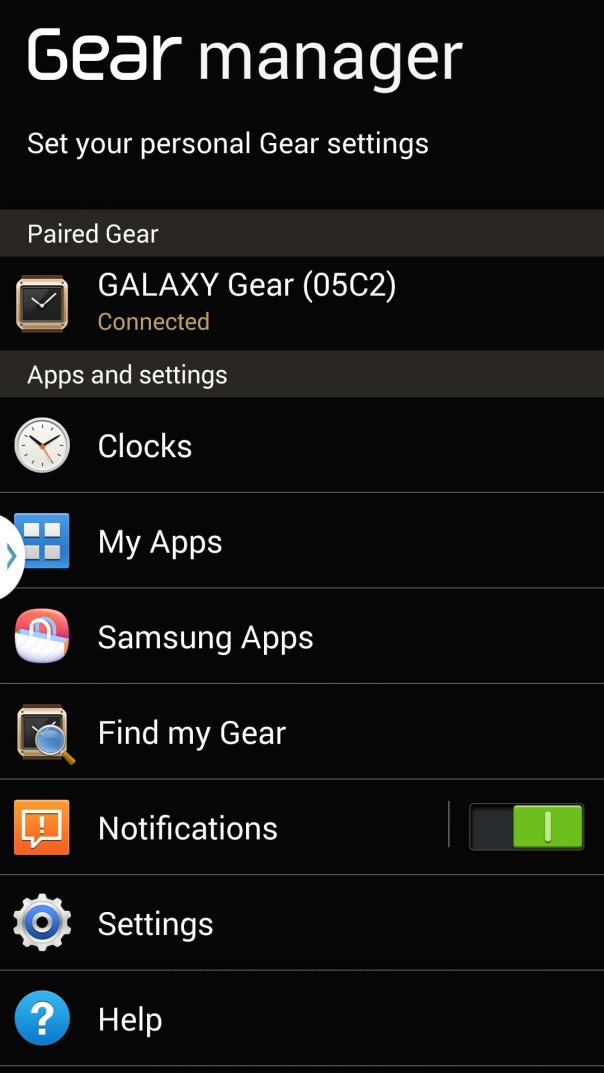 And then there is a whole section just for notifications.

And then third party notifications. So for example I have twitter and Google Now selected.

Each of the included apps on the Gear has settings. 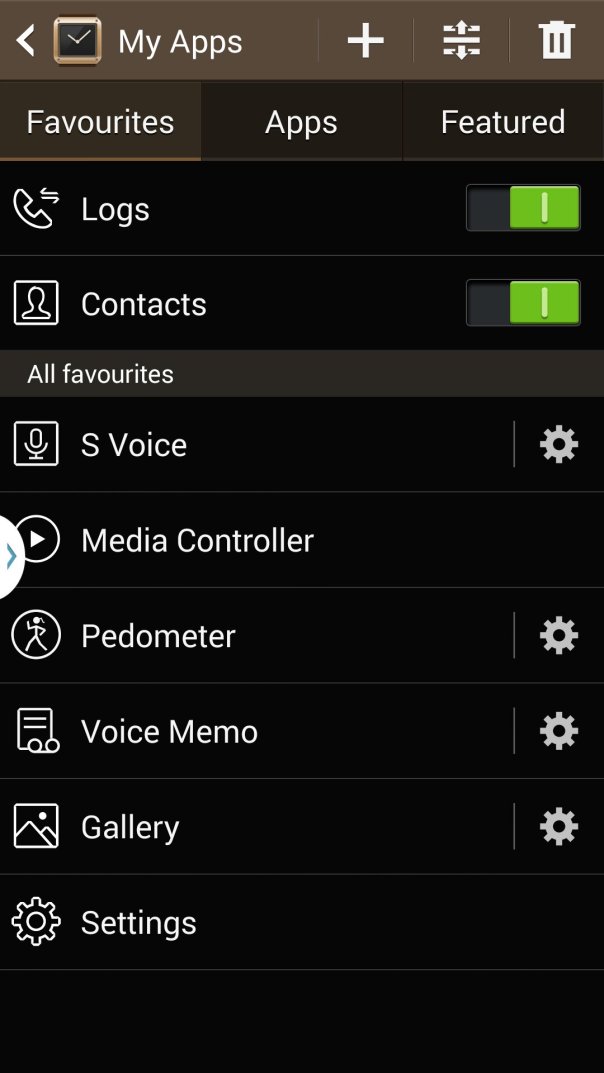 So it all seems very complicated at first. And it is. I didn’t grasp what was happening where and why but as day 1 progressed everything started to fit into place. Day 1 involved involved taking a number of photos with the Gear, asking S Voice to call a contact and then have a conversation using the Gear, all very James Bond 007 style. If the Gear and the Note 3 become separated the Note 3 locks. You can also double press the power key for S Voice which is marginally better than on the Note 3. For whatever Siri faults are on the iPhone, it is better than S Voice. However S Voice on the Gear is much better than on the Note 3 itself. I also had tons of notifications arriving. I had the Gear on vibrate but there are tones to select and different volumes. There is also a brightness and screen off delay settings. You can wake up the Gear display just by looking at the Gear. The accelerometer activates screen with the correct motion. I was dubious as to whether this function would work as well as described but it does. The other neat motion based function that works really well, is say I get a new tweet notification and pick my Note 3 up, the Gear will open the Note 3 twitter app at the notification. Rather neat.

So how easy is the interface? Actually very straight forward. With the clock showing, swipe down from edge to edge for camera, swipe up edge to edge for phone dialler. Two finger tap beings up Bluetooth and battery level status, volume and brightness adjustment. Swiping across to the left brings up the notifications, and contacts if you go the other way. Keep swiping to scroll through all the other apps. The menu does loop so you don’t have to go all the way backwards again. For every app that has a notification you can delete individual notifications or select all within that app. But you can’t at the moment do a global delete all app notifications as mentioned above. I have used S Voice to find a contact, dictate a text message and send it perfectly. To go backwards, just swipe down. Two finger holding on the display beings up recent apps and you can swipe away any you wish to close. The Gear will take a max of 50 photos after which you will need to delete them off the phone. After each photo , the Gear will transfer them to your phone. You can record 3 video clips in a row, after which the camera app closes to maintain optimal performance. The camera has a macro mode option. You can alter the order of apps and move apps in to the app folder or just have one app per whole screen. In the app folder 4 apps are shown per page.

Talking of apps some companies have released Galaxy Gear specific apps. I have installed the following.

Ebay for Galaxy Gear – works same as main app but only able to browse your activity.

Pocket – flick thru your articles. Hit play and the articles are read aloud through the Note 3. I really like this operation.

Zite – flick through headlines. Tap on article and it opens on phone. Not sure of usefulness of this but it’s different.

Camera 360 – adds some effects and frames for the Gear camera. A worthy extra.

Sample low light shot. I have created another post with some additional camera samples. You can remove the Galaxy Gear watermark as well.

So with all this activity what’s the battery like. Well from 8am to 7pm it knocked the battery to 50% meaning I would need to charge to overnight. With lighter usage maybe a second day is possible, but one full day is not unreasonable.

Is it worth £299. No. But who else sells a smart watch that can make calls, has a camera and speaker built into the strap? Will I keep it. Yes.